So after months of speculations, rumors and leaks Samsung Galaxy Note 10 is here, launched in (August, 2019). This phone introduce the new smart feature which is S Pen magic. From which you can move your S pen into air to perform actions like capturing pictures like twisting and turning the pen in the air besides this you can also zoom your camera or change the volume.

You can also control YouTube and other media apps. In addition to air gestures you will also have the Bluetooth control so you can do things like wireless play and pause music along with using the pen as the camera shutter.

Therefore, Samsung Galaxy Note 10 now has live-focus in video recording so it applies back ground blur footage in real time and It feels like the professional camera which is really good thing. You may also add some other special effects while you capturing the footage so it will enhance the quality of the video.

This phone provides 3500 mAh battery besides this it also provide 40W of super fast charging. It has also gotten the wireless charger which supports up to 15W fast charging. The display of this phone is much trendy because of its glass look and display  is 6.3 inches touch screen with dynamic AMOLED.

Most importantly Samsung Galaxy Note 10 has 8GB RAM and 256GB of internal storage therefore it will provide the better performance during running the multiple apps so overall people have mentioned the good reviews regarding this phone because it does same almost what it claims. 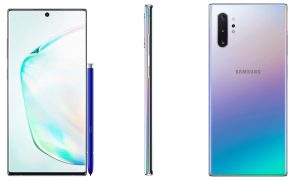